We get into a whole ton of fun stuff in our chat, but before we go to deep here, let’s take a moment so that you can make yourself a drink. This episode’s featured cocktail is Dandelion Wine...which really isn’t a cocktail at all, but it is a fun DIY project that we discuss in more detail during our conversation. The recipe I’m about to share with you is one that we modified from Allrecipes.com using the critical feedback of various reviewers who tweaked the recipe to be more successful than the original. To make dandelion wine, you’ll need: 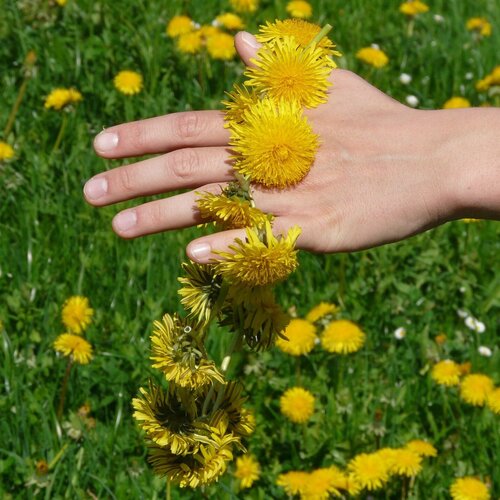 Half a gallon of dandelion blossoms (just the yellow flowers - not the green stems and sepals) 3-4 cups of sugar (depending on how sweet you like your wine) An orange, a lemon, and a lime, all sliced 1 gallon of water 1 packet of winemaker’s yeast And, like most large fermenting projects, you’re going to want some quart sized mason jars, as well as a glass fermenting carboy with an air lock. The process for making it goes as follows: When those pesky little dandelions start blossoming all over, go out with a half gallon milk jug that you’ve cut the top off of and fill it with just the fluffy yellow blossoms of the flower. Or, if you want to be super efficient, dig up the whole dandelion and use the roots and leaves for your next bitters project. Then, in a large stock pot, bring your gallon of water up to a boil, add the dandelions blossoms in, then cut the heat and let them steep overnight. Next, remove and discard the blossoms, add your citrus and sugar, and boil for a further 10 minutes, stirring to make sure the sugar dissolves. Then strain into your sterile fermentor, wait until the water cools to around 90 degrees fahrenheit, add your yeast, and store in a cool, dark place for a couple weeks. When the wine has stopped bubbling, that means the yeast have converted all the sugar they can into alcohol. At this point, you can filter and bottle the wine, especially if you’ve been using that airlock to release the CO2 produced by the yeast. But if you haven’t used an air lock, you’ll want to give some of that carbon dioxide a bit of time to blow off unless you want your jars or bottles to explode after bottling. Dandelion wine is often aged in the bottle for 6 months or more to allow the flavors to meld together. But this isn’t a left-bank Bordeaux, so there’s no reason you shouldn’t drink it within 2 years of bottling.